Facade windows on the sunrise side

The facade windows of the upper floor of Oodi have been lifted into place in the eastern wall of the building, facing the sunrise in the morning. Even though bright mornings are still some way away, the floor-to-ceiling high windows are a delightful sight amidst the greyness of early winter.

In the photo, manlifts are used in the dismantling of EPS boards, which were used as wall structures that insulated the building and protected it against wind before the windows were installed into their mechanical fittings. The windows will not be visible for very long on the Töölönlahdenkatu side, since when seaming work starts, the eastern wall will be covered by scaffolding and weather guards. 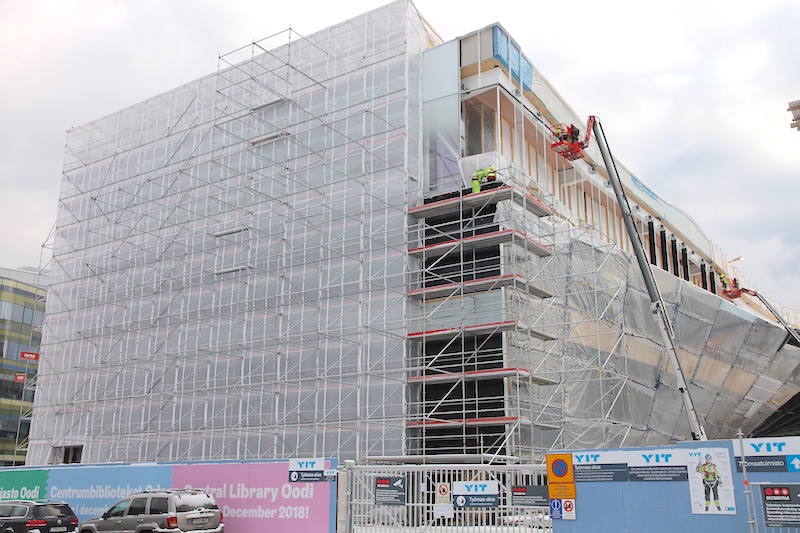 At this stage, the weather guard is covering the northern end of the building. The windows will be sealed both from inside and outside, and the weather guard will ensure suitable temperatures above freezing point and dry conditions.

The curving forms of the Oodi facade are starting to emerge now that some of the facade elements have been lifted into their fittings on the building’s western side. Later on, the elements will be covered with wooden framing, to which the final surface material will be attached. The balcony is located on the outward leaning wall. 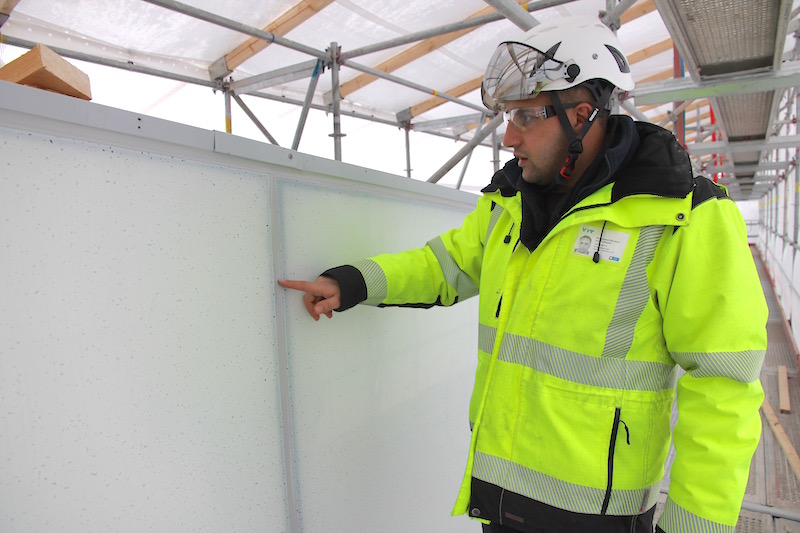 The weather guard continues up to the roof, as work on the eaves is also taking place behind it. Site manager Mansoor Ardam inspects the seaming work on the windows. A seam can only be approved if it is straight and shows no signs of additional notches. The elastic mass adheres best to a dry, clean surface. 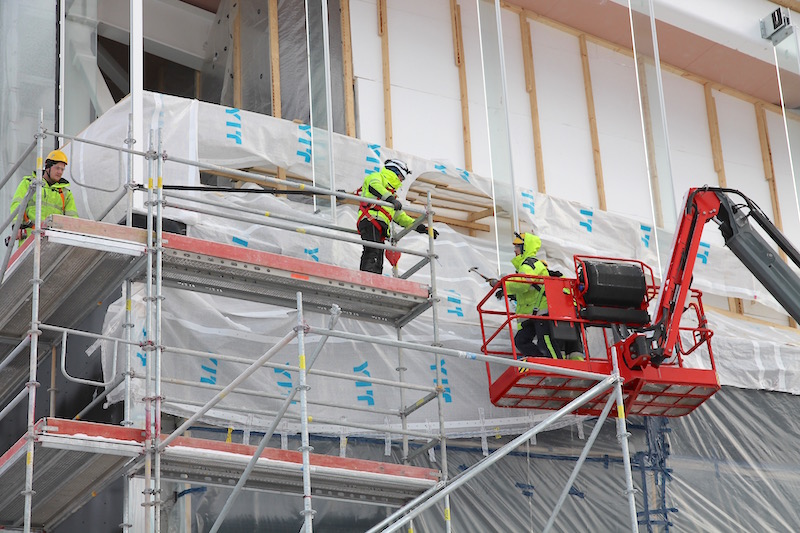 At the end on January, the worksite prepared for the installation of the third-floor facade windows on the sunset side too, on the building’s western facade. At first, glass pillars that support the surface windows were installed. When the glass pillars are tightly attached to their steel fittings, the up to nine-metre tall and 1,500 kilo multi-floor windows can be lifted in place with the help of a suction cup lift.

Heaters will be hidden from view

In the midst of the freezing winter, the average person may wonder how the aquarium-like third floor can be kept warm, when all the walls are made of glass, from the floor to the ceiling. The professionals have come up with a perfect solution, which also happens to be an aesthetic one too. No water-filled radiators will be installed in front of the windows so that they do not break the visual cohesion of the glass walls. 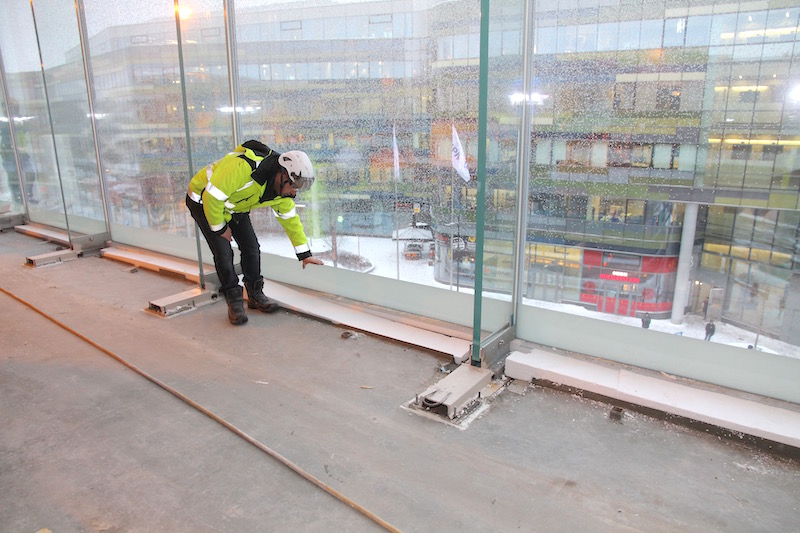 “The space is heated by narrow convectors installed under the installation floor that blow warm air at the lower edge of the glass,” Mansoor Ardam explains, showing how the draught-prevention solution will be built in front of the windows. The technology will be installed on the concrete floor, which will be covered with an installation floor. A library user can step right up to the windows without having to dodge the radiators. 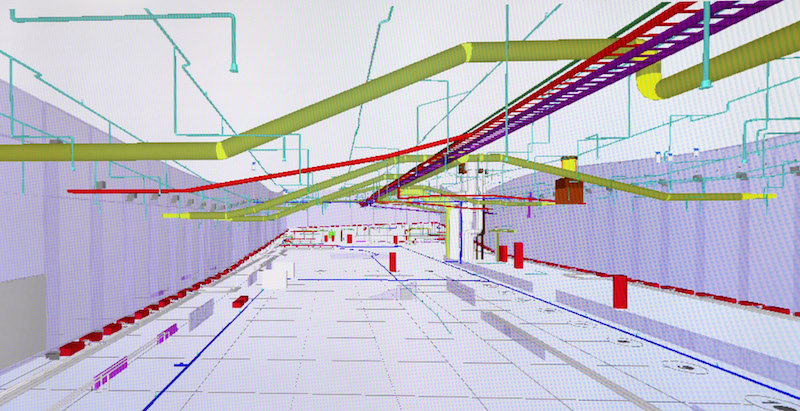 In the computer modelling, the convectors are shown as the low red blocks below the windows. A great deal of building technology will be hidden between the roof and the suspended ceiling on the third floor: the ventilation pipeline is show in green, the sprinkler system in turquoise and the electric cables in purple. Only the sprinkler nozzles will be visible after the third floor’s wavy suspended ceiling has been installed.

The suspended ceiling, which is shown in the image as the neon green structure, will be installed at a notably low level compared to the height of the ceiling, due to the large amount of building technology. A maintenance bridge will be fitted over it, for example, and its installation work is now starting.

Whilst the third floor is an open space, the second floor is filled in with different rooms. Their walls will be built based on the room’s purpose of use, either from glass, bricks or gypsum board. Right now, the gypsum walls are being built at a quick pace. 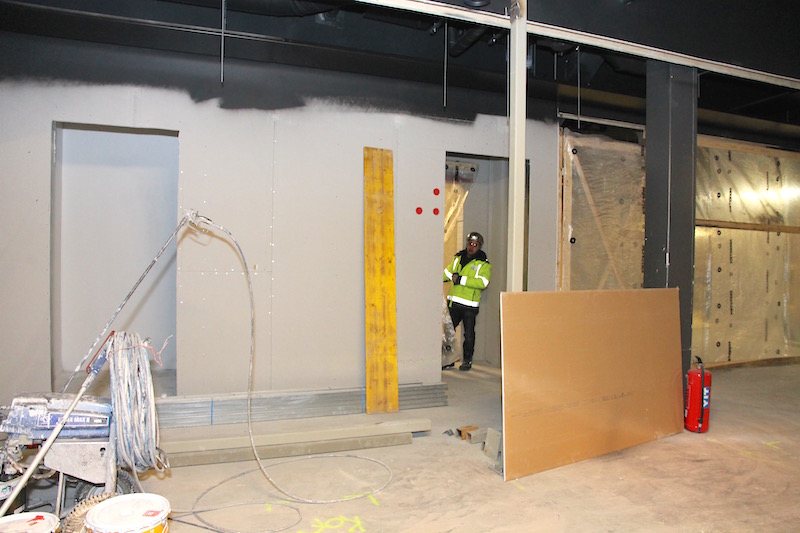 About half of the second floor gypsum walls have been finished. The corridor in the photo leads to the game rooms. The second floor brings the traditional library institution into a new era. It will house two general recording and editing rooms, a photography and video studio, a room for playing instruments, a control room, a drum room, offices, meeting rooms, a media room and rooms for small groups. In addition to the building of partition walls, acoustic insulation wool is being installed and gypsum boards are being painted and plastered on the second floor. 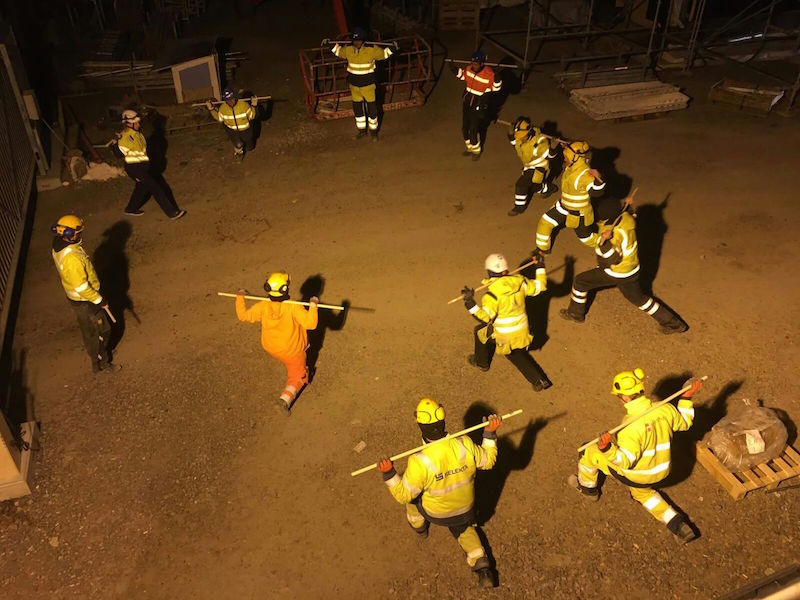 At the Oodi worksite, mornings are now started with stick workout at 7 o’clock! Stretching and squatting for a few minutes gets blood pumping and warms up the muscles. This habit increases occupational health and safety. The exercises make reactions and coordination abilities quicker and help maintain balance better. Over a dozen people may take part in the classes. Photo: Anniina Kallioniemi. 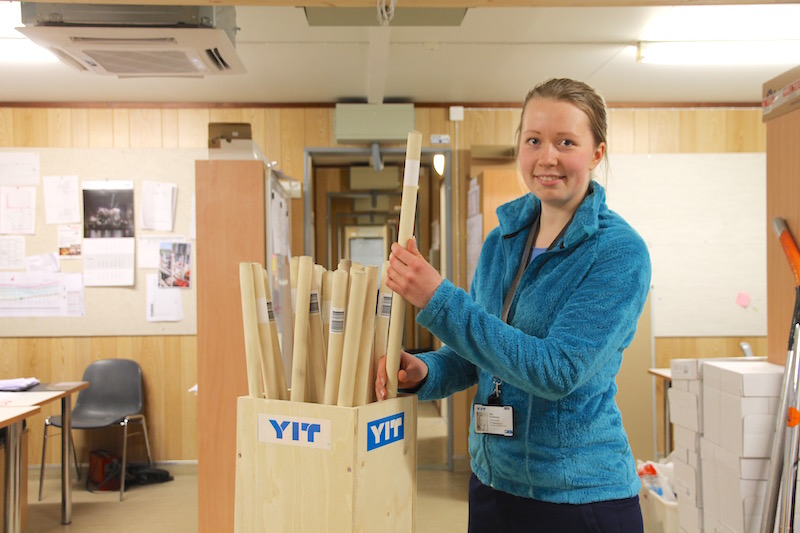 “Even though the workers were at first hesitant about the exercises, in the end they even built the exercise sticks, i.e. broomsticks, their own transport crate with a sling attached,” she says. 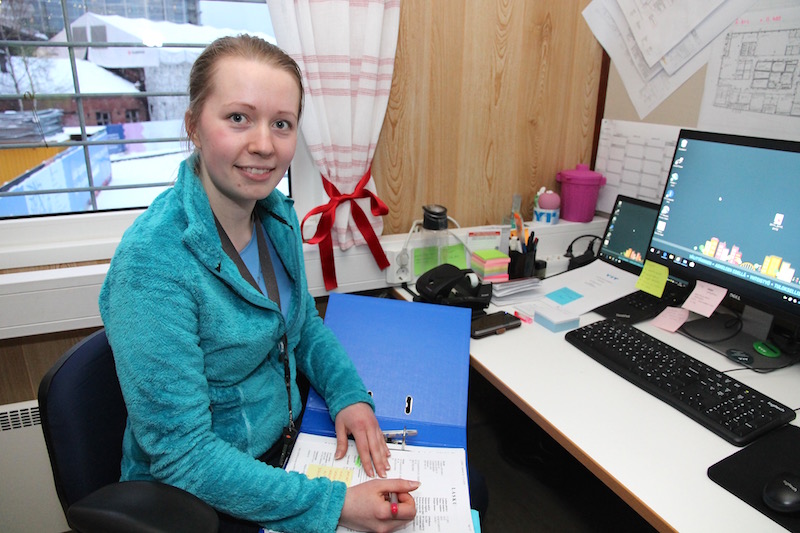 Essi graduated as construction supervisor from Häme University of Applied Sciences, and before Oodi worksite, she worked at six different sites. She finds it fascinating that each project creates a monument, whether it is an industrial hall or a library.

Read next See all articles

Central Library Oodi to resume loans on 8 May

Returns are accepted from Monday 4th May on