In November, the lifting of the facade windows of Oodi’s upper floor into place was started using a suction lifter, which was custom-made for the library worksite. One heavy, multi-floor glass window after another, the device latched onto the windows and lifted them to the northern end of the building, where the installation work was started.

The manufacturer and installer of the windows, Estonia-based Windoor AS, commissioned the lifting equipment from Italy in order to ensure that the windows, each weighing about as much as a car, could be installed steadily and safely. When a 1,000–1,500 kilo, fragile object with a slippery surface is hanging above the ground, there is no room for even the smallest of slips. Photo: Mansoor Ardam. 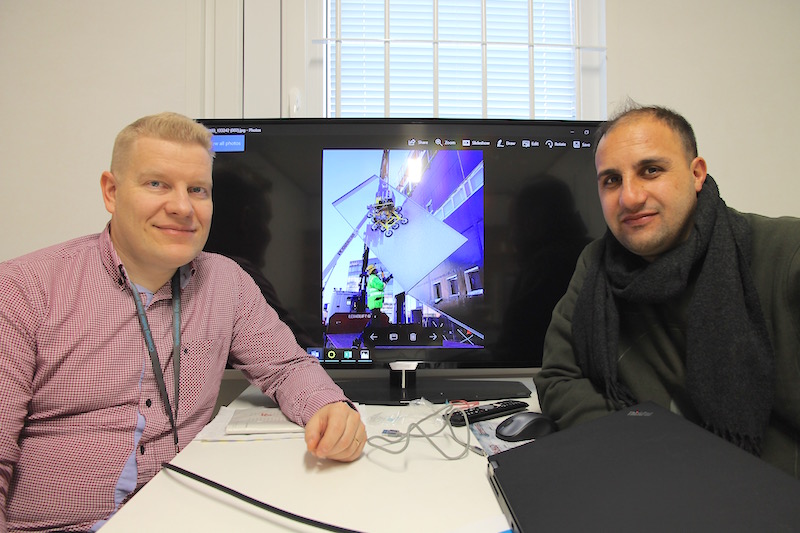 “When installing the windows, we will proceed systematically, one block and one side at a time. From the northern end, the installation will continue towards the eastern side, where the lined windows have already mostly been installed,” says Tero Seppänen, YIT’s senior site manager (left).

The lined windows are a relatively standard construction element, but the third-floor facade windows are, both in size and with regard to the installation method, the most exceptional Tero Seppänen and site manager Mansoor Ardam (right) have faced during their careers. 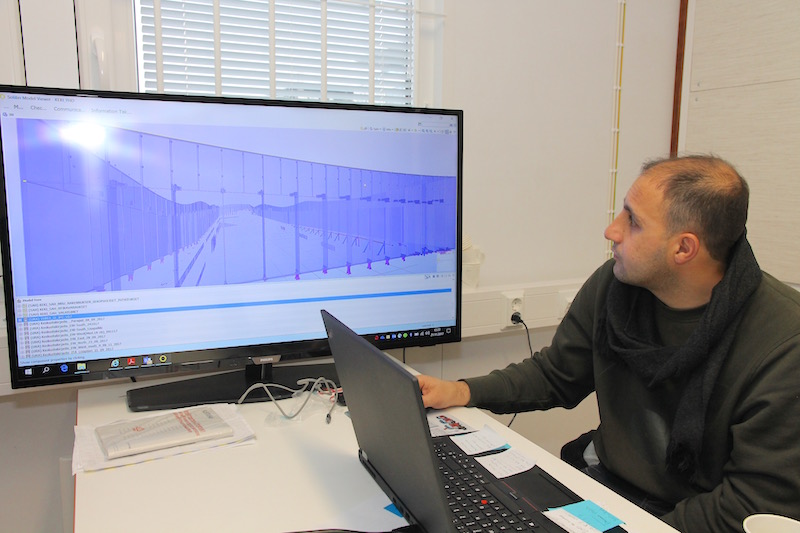 At the northern end, the glass wall is nearly eight metres tall, and at the western and eastern sides it reaches its peak height: over nine metres. A solid glass layer will also be installed above the large surface glass layer in order to cover the eaves. The entire work phase, including puttying, will last until late spring.

“Puttying requires very specific conditions, since the surfaces to be treated cannot be damp. The work is mostly carried out when the weather permits or under weather protection. We are currently considering our options. We will also carry out tests and confirm the quality of the seams by sending test samples to the putty manufacturer,” Seppänen and Ardam explain. 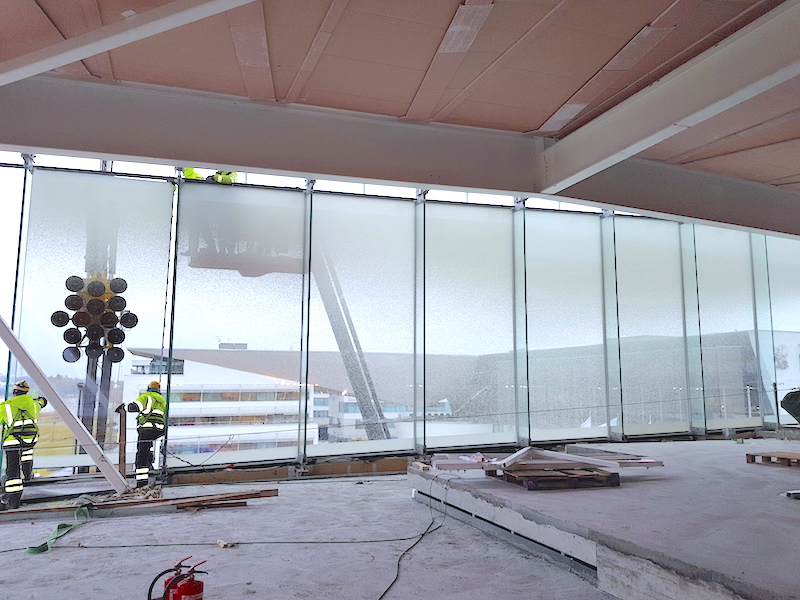 During the initial installation stage, the individual glass sheets will remain in place thanks to mechanical attachment parts. The 16 suction cups of the special lifter will hold the glass up until it can be attached. At the next stage, the seams will be made water-tight and structural seaming of the corners will be carried out. Photo: Mansoor Ardam. 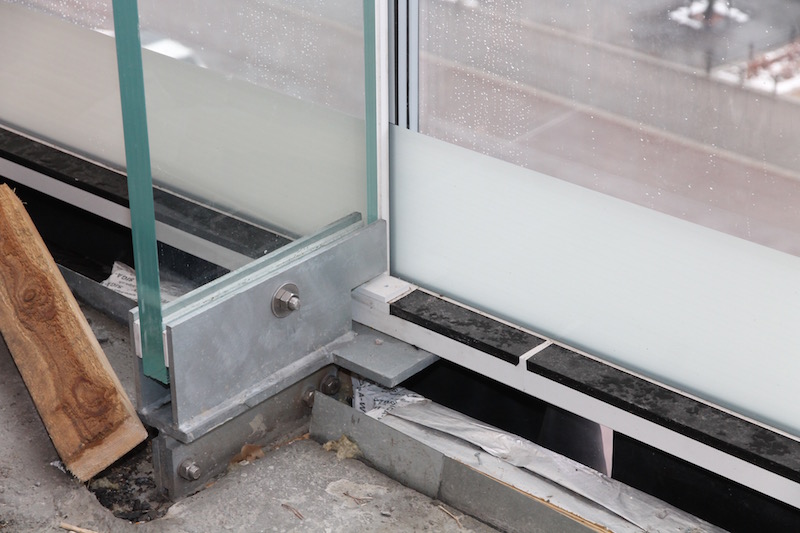 The surface windows will be supported on glass pillars that, in turn, have been fitted into steel slots. The Finnish weather conditions have been taken into account in the surface window’s structure and pattern: The multilayer window conserves heat in the winter and the printed pattern lessens the direct sun glare in the summer. 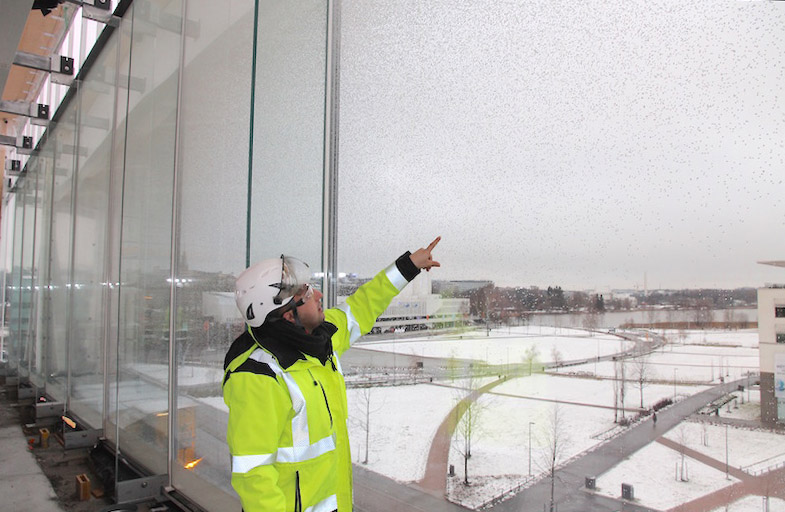 The upper part of the windows is solid and white, but towards the lower part it becomes dotted, imitating falling snow. The pattern thins out gradually and the lower part of the glass is clear and transparent. Worksite manager Mansoor Ardam points at the snowfall print. He has made a computer tool that allows for control and monitoring of the installation. 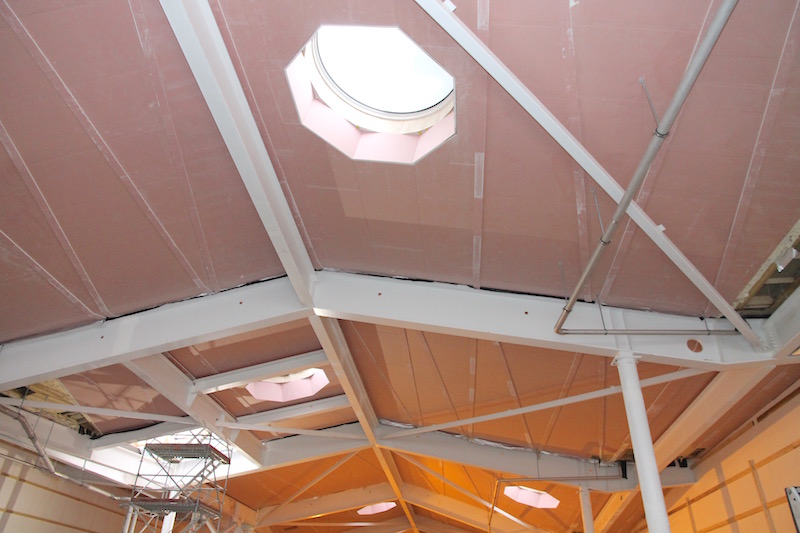 The skylights have also been installed into their octagonal niches, and the roof’s insulation work has been completed. The insulation board walls on the third floor will be replaced by glass one by one, drastically changing the appearance of the entire space.

The northern end also features a special window design on the ground level; a small entrance hall to the family library and a storage space for prams will soon be built behind the triangle-shaped window. The needs of children have been carefully considered when planning the space, as the family library will also feature a small kitchen and a space for eating snacks. 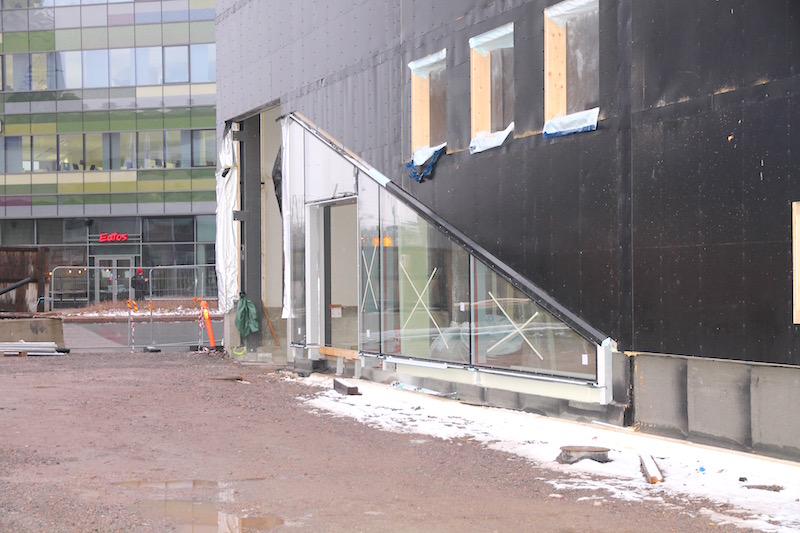 The northern entrance is also an easy way to reach the cinema’s foyer, the meeting and public spaces and the café-restaurant. The vehicle entrance to the underground premises is located next to the entrance hall. 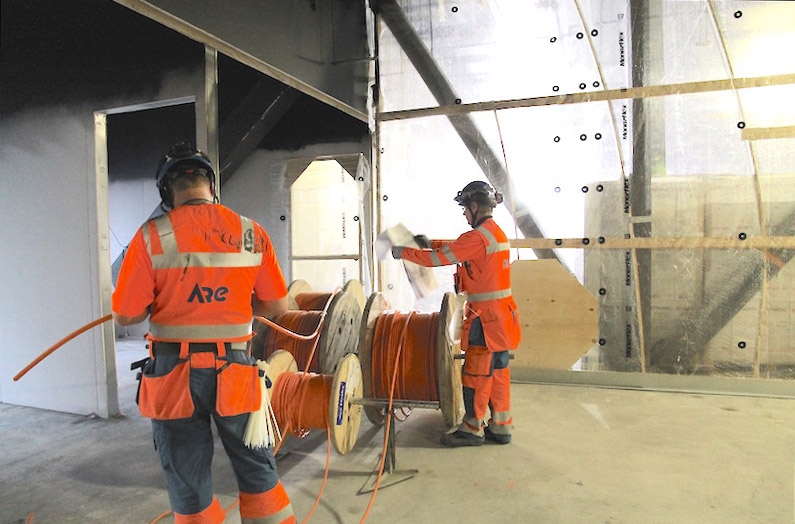 Building technology work is constantly progressing in the different blocks and more and more partition walls are being built. Here, workers can be seen consulting electrification plans.

The balcony was put through a pressure test

A pressure test was carried out for the balcony in late November. Its purpose was to discover any possible leaks before the concrete slab casting taking place in December. 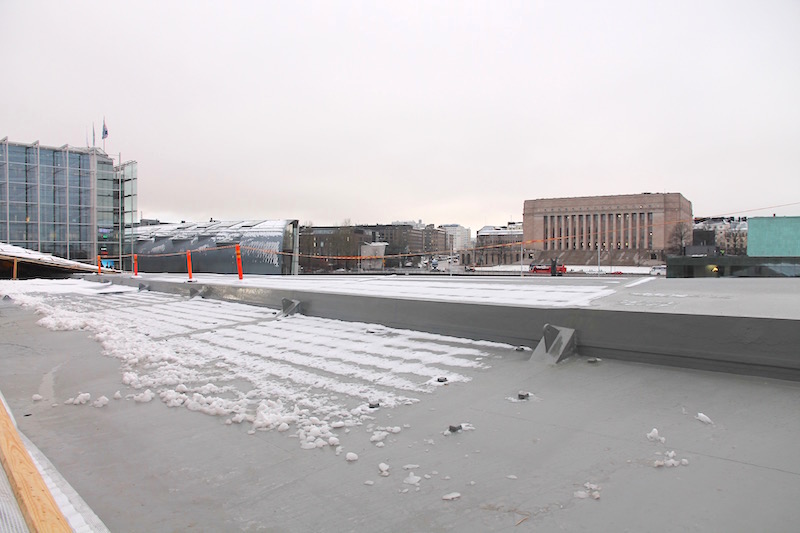 “The drains on the balcony were sealed and 200 millilitres of water was conducted onto the surface in order to discover the spots that needed to be made water-tight. The joints and seams of drains and pipes were also tested separately. The surface cannot be cast until the structure is water-tight. A wooden structure will later be built on the concrete slab,” Tero Seppänen explains. 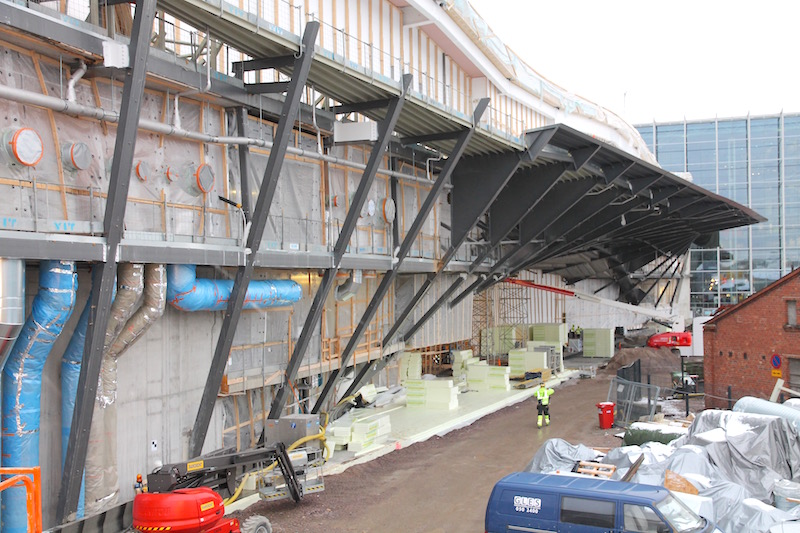 On the western side of the building, the insulation work for the building’s base as well as land construction work were carried out in late November. A concrete slab will be cast along the building’s wall and will be covered by the final paving.

Site manager has no fear of the square and cubic metres

The main contractor YIT has received some reinforcements. Hannu Heikkinen, originally from Rovaniemi but now enjoying his fifth year in the south, is in charge of the building technology and its coordination. The electrical power engineer has worked in the real estate field for 35 years, and has been involved in the construction of residential and office buildings, production premises and the office building of a mine in the north, but Oodi is turning into the largest worksite in his entire career. 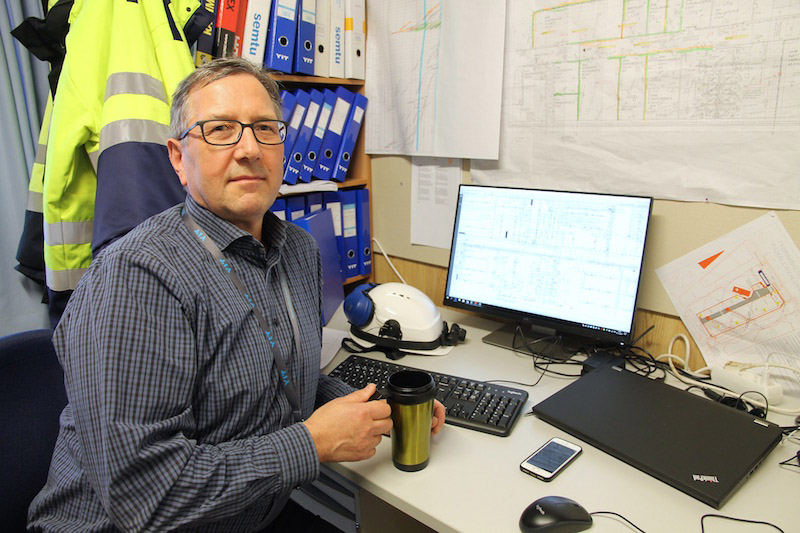 “The size of this project does not intimidate me, since it’s all about teamwork. Coordinating the interfaces between the different building technology operators can be challenging, but it becomes easier when you work with team players,” says Heikkinen, who, in his spare time, takes part in moose hunts and also acts as a trainer at the National Defence Training Association of Finland.

Read next See all articles

Central Library Oodi’s first year has been a success